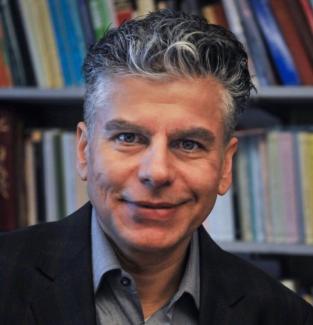 Sufism is an Islamic belief and practice in which individuals seek an intimate personal experience of God. This intimate connection has been a major subject of Persian poetry for many centuries and is often described as a feeling of intoxicating love. Join Professor Jamal J. Elias as he explores Sufism and Sufi poetry using examples from famous figures such as Rumi, as well as from other lesser-known poets in Persian and other languages. He will be sharing poems in translation and the original and providing suggestions for further reading.

Jamal J. Elias is Walter H. Annenberg Professor of the Humanities and Professor of Religious Studies at Penn, where he teaches about Islamic intellectual history and culture with a focus on Western and South Asia. He is the author of Alef is for Allah: Childhood, Emotion, and Visual Culture in Islamic Societies (University of California, 2018); Aisha’s Cushion: Religious Art, Perception and Practice in Islam (Harvard, 2012); On Wings of Diesel: Trucks, Identity and Culture in Pakistan (Oneworld, 2011); and The Throne Carrier of God: The Life and Thought of ‘Ala’ al-Dawla Simnani (SUNY, 1995), among others. Most recently, he has co-edited (with Bilal Orfali of American University Beirut) a volume entitled Light Upon Light: Essays in Islamic Thought and History in Honor of Gerhard Bowering. His current major project deals with the history of the Mevlevi Sufi Order from shortly after the death of its founder, Jalaluddin Rumi, in 1273 C.E. until the advent of modernity.

Co-sponsored by Penn Alumni Travel and Penn Alumni Education, the Global Discovery Series explores the world virtually with Penn faculty members and your fellow alumni community. Each live, interactive lecture features Penn professors sharing new and innovative research on a variety of topics. Participants will have the opportunity to ask in-depth questions and are sure to learn something new in each one hour session.