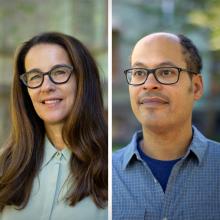 Gibney is an algebraic geometer who has obtained deep results about moduli spaces of complex curves and more recently on vertex operator algebras—core topics that arise in algebraic geometry, algebraic topology, and mathematical physics. In the past two years she has made breakthroughs on constructing two-dimensional topological and conformal quantum field theories, proving a series of longstanding conjectures having applications to enumerative geometry of moduli spaces. Her multiple grants include individual NSF research grants, and her work has appeared in high-level journals including Advances in Math, IMRN, Algebraic Geometry, Algebra and Number Theory, and Journal of the AMS. Gibney has been very involved in outreach activities to promote mathematics education at all levels, and to "widen the pipeline" to include women and others who are currently underrepresented in mathematics.

Krashen’s research is in algebra and arithmetic geometry including the study of division algebras, quadratic forms, local-global principles, moduli stacks, and derived categories. These areas have connections to a wide range of fields, including physics and cryptography. He has been awarded multiple NSF grants, including a CAREER award, as well as the prestigious Presidential Early Career (PECASE) award. He is a Fellow of the American Mathematical Society. His publications have appeared in top journals including Inventiones, Advances in Math, IMRN, and Crelle's Journal. Krashen has also been active in promoting outreach and diversity in mathematics at a range of levels from middle school through early career professors.

The Presidential Professorships are five-year term chairs, awarded by University of Pennsylvania President Amy Gutmann to outstanding scholars, whose appointments to the standing faculty are approved by the Provost and who demonstrably contribute excellence and diversity to Penn’s inclusive community.