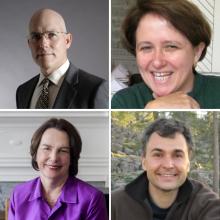 Devlin, of the Department of Physics and Astronomy, specializes in experimental cosmology. He has led a number of ground-based and high-altitude balloon experiments including the Atacama Cosmology Telescope (ACT) and the Balloon-Borne Large Aperture Telescope (BLAST). His pioneering research has earned him a National Science Foundation Early Career Development Award and a Sloan Foundation Fellowship. Devlin’s teaching was previously recognized with an Ira H. Abrams Memorial Award for Distinguished Teaching, the highest teaching award from Penn Arts & Sciences.

Mitchell is an anthropologist and historian of southern India.  Her interdisciplinary research and teaching interests include democracy in India; political practice, public space, and the built environment; the cultural history of cement in South Asia; ethnography of informal urban credit networks; technology and infrastructure and their impact; and neoliberalism and economic corridors. Her book, Language, Emotion, and Politics in South India: The Making of a Mother Tongue, received the American Institute of Indian Studies' Edward Cameron Dimock, Jr. Prize in the Indian Humanities.

Bill Ashmanskas, Senior Lecturer in Physics, was recognized with a Provost’s Award for Teaching Excellence by Non-Standing Faculty. Ashmanskas works on readout electronics, instrumentation, and data acquisition for High Energy Physics and for Positron Emission Tomography, and is a member of the physics department’s HEP Instrumentation Group and the radiology department’s Physics and Instrumentation Group in the Perelman School of Medicine. He has previously received the College Dean's Award for Distinguished Teaching by Affiliated Faculty and an Excellence in Teaching Award from the undergraduate architecture program.

Annette Lareau, Edmund J. and Louise W. Kahn Endowed Term Professor in the Social Sciences, received a Provost’s Award for Distinguished Ph.D. Teaching and Mentoring. A sociologist who studies family life, Lareau is interested how the social position of children and parents has an impact on the quality of their life experiences.  She has explored these issues in the arena of family-school relationships, child rearing, the process through which parents go about deciding where to live and send their children to school, and in families with high net worth. Her books have won numerous awards.