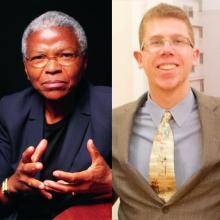 The speakers for this year’s College of Arts & Sciences virtual graduation celebration are Mary Frances Berry, Geraldine R. Segal Professor of American Social Thought and a professor of history and Africana studies, and Justin Greenman, C'21, a double major in history and political science. The celebration recording will be available online as of 1:00 p.m. ET on Monday, May 17.

Berry has had a distinguished career in both public service and academia. From 1980 to 2004, she was a member of the U.S. Commission on Civil Rights, serving as its Chair from 1993-2004. Between 1977 and 1980, she was the Assistant Secretary for Education in the U.S. Department of Health, Education, and Welfare. Berry has received 35 honorary doctoral degrees and numerous awards, including the NAACP's Roy Wilkins Award and the Rosa Parks Award of the Southern Christian Leadership Conference. She is a Fellow of the Society of American Historians and of the National Academy of Public Administration, a Distinguished Fellow of the American Society for Legal History, and a recipient of the Roy Rosenzweig Distinguished Service Award of the Organization of American Historians. She has authored numerous books, most recently History Teaches Us to Resist: How Progressive Movements Have Succeeded in Challenging Times.

Greenman was an Undergraduate Fellow in the Wolf Humanities Center, a member of the Department of History Honors Thesis Program, a Meltzer Intern in the Jewish Studies Program, and a Penn in Poland Fellow for Penn Hillel. He was also a member of Penn's Phi Alpha Theta and Pi Sigma Alpha honor society chapters. Outside of classes, Greenman served two years as President of the Penn Government and Politics Association, hosted a talk show on WQHS, and sat on the History Undergraduate Advisory Board and the Penn Library Advisory Board. After graduation, he plans to pursue a Ph.D. in history and become a college professor.

The celebration will also feature remarks from Steven J. Fluharty, Dean and Thomas S. Gates, Jr. Professor of Psychology, Pharmacology, and Neuroscience, and Paul Sniegowski, Professor of Biology and the Stephen A. Levin Family Dean of the College of Arts & Sciences. There are 1,513 graduating students, each of whom will have the ability to upload a photo and message to a special website.