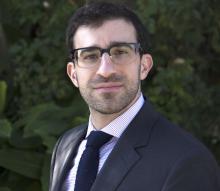 Joshua Teplitsky has joined Penn Arts & Sciences as Joseph Meyerhoff Associate Professor of Modern Jewish History. Previously Associate Professor of History at Stony Brook University, Teplitsky is a leading expert on the culture and life of Jews in early modern Central Europe. He is the author of Prince of the Press: How One Collector Built History’s Most Enduring and Remarkable Jewish Library, which won several awards. Teplitsky has been a fellow at the University of Oxford, at the Rare Book School at the University of Virginia, at Harvard University, at Tel Aviv University, and at the Yad Hanadiv/Beracha Foundation Programme in Jerusalem. In addition, he has twice been a fellow at Penn's Herbert D. Katz Center for Advanced Judaic Studies. His research has been supported by numerous grants, and he serves as an Associate Editor of the Encyclopedia of Jewish Book Cultures, as Co-Director of the digital humanities project Footprints: Jewish Books Through Time and Place, and on the editorial board of the German Jewish Cultures monograph series. He is currently at work on a second book, titled Quarantine in the Prague Ghetto: Jews, Christians, and the Plague in Early Modern Europe.

The late Herbert D. Katz, W’51, and Eleanor M. Katz were longtime supporters of Penn Arts & Sciences and Jewish Studies. They endowed this chair in 1989 through the Joseph Meyerhoff Memorial Trust. The chair supports an outstanding scholar of modern Jewish history. Herbert D. Katz served as a chair of the Center for Advanced Judaic Studies Board of Advisors and on the Penn Arts & Sciences Board of Advisors. In 2008, the Katz family endowed the Herbert D. Katz Center for Advanced Judaic Studies in his memory.