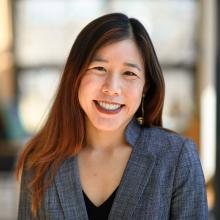 Melissa M. Lee has joined Penn Arts & Sciences as Klein Family Presidential Assistant Professor of Political Science. A specialist in conflict studies as well as the international and domestic politics of statebuilding and state development, Lee comes to Penn from Princeton, where she was Assistant Professor of Politics and International Affairs. Her book, Crippling Leviathan: How Foreign Subversion Weakens the State, examines how foreign subversion by enemy countries creates geographic spaces beyond the state's control and limits the government’s ability to provide public services. Lee has received several honors and recognitions of her work, including a Perry World House Lightning Scholar Fellowship. She earned her Ph.D. in political science from Stanford University in 2015.

Scott M. Klein established the Klein Family Presidential Professorship in 2021. He is a member of Penn’s Southern California Regional Advisory Board. Klein is one of the founders of Beach Point Capital Management LP and serves as Co-Chairman and Co-CEO. In addition to the professorship, he established the Klein Family Social Justice grant program at Penn Arts & Sciences, and supports undergraduate financial aid at Penn. Klein graduated from Penn in 1988 with degrees from Wharton and the College of Arts & Sciences.