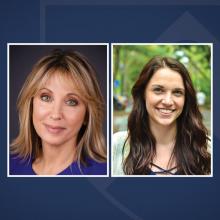 Stacey Snider, C’82, PAR’19, the only woman to have run two major movie studios, and Hannah Sweeney, C’19, will speak at this year’s graduation ceremony for the University of Pennsylvania College of Arts & Sciences. The event will take place on Sunday, May 19, at 6:30 p.m. on Franklin Field.

Stacey Snider most recently served as Chairman and CEO of Twentieth Century Fox Film, overseeing all areas of the studio, including its five production divisions, global marketing, distribution, and home entertainment. The studio has annual revenue in excess of $8 billion and operates in more than 100 countries worldwide.

Prior to Fox, Snider served for eight years as CEO and Co-Chair of DreamWorks Studios, where she ran creative and financial aspects of all film development and production for the studio. She has also held executive positions at Universal Pictures, TriStar Pictures, and Guber Peters Entertainment. During her career she has presided over a wide range of commercially successful and critically acclaimed films, including The Favourite, Bohemian Rhapsody, The Shape of Water, Lincoln, and The Help.

Snider currently serves on the boards of City Year, UCLA School of Law, and Harvard-Westlake School. She is a member of the Penn Arts & Sciences Board of Overseers, The Trustees’ Council of Penn Women, and the Parent Leadership Committee. She majored in international relations at the College of Arts & Sciences before earning a J.D. at UCLA.

Hannah Sweeney came to Penn from of Lake Havasu City, Arizona, as a QuestBridge Scholar. She majored in political science with a concentration in international relations, and minored in gender studies, religious studies, and German. She served in the Undergraduate Assembly, as an original board member of the first-generation/low-income student movement PennFirst, and a board member of Pi Sigma Alpha, the Political Science Honors Society. She also worked at the Penn Women’s Center and the Nationalities Service Center, and was a member of the Penn Anti-Violence Educators. Sweeney is a Wharton Public Policy Grant recipient and B.A. Rudolph Public Service Scholar, and has interned with the U.S. State Department in Washington, D.C. and the U.S. Mission to the United Nations Human Rights Council in Geneva. She received the prestigious Thouron Award, which she will use to obtain a Masters in Human Rights at the London School of Economics. She hopes to pursue a future in international human rights and refugee law.

Howard Marks, W'67, is a longtime supporter of writing education.
View Article >
Copyright © 2020  The Trustees of the University of Pennsylvania
Report Accessibility Issues and Get Help
Penn Weblogin