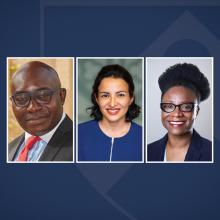 “I am thrilled to welcome Wale, Jennifer, and Keisha-Khan to the School,” says Steven J. Fluharty, Dean and Thomas S. Gates, Jr. Professor of Psychology, Pharmacology, and Neuroscience. “Their research advances conversations that matter deeply to our world. As scholars and teachers, they will contribute to the robust intellectual inquiry of the Africana Studies and Philosophy departments and enrich the community across the University.”

Adebanwi, a political scientist and anthropologist, was previously Rhodes Professor of Race Relations at Oxford University. His research addresses the social mobilization of interest and power in contemporary Africa as manifested in nationalism and ethnicity, race relations, identity politics, elites and cultural politics, democratic process, newspaper press and spatial politics. He is the author of three books, including Nation as Grand Narrative: The Nigerian Press and the Politics of Meaning. Since 2016, he has been co-editor of AFRICA: Journal of the International African Institute and before then the co-editor of the Journal of Contemporary African Studies. Adebanwi joins Penn as Presidential Penn Compact Professor of Africana Studies.

Also joining Africana Studies is Perry, who has been appointed Presidential Penn Compact Associate Professor. Perry comes to Penn from Brown University, where she was Associate Professor of Africana Studies. Her research is focused on race, gender and politics in the Americas, urban geography and questions of citizenship, intellectual history and disciplinary formation, and the interrelationship between scholarship, pedagogy and political engagement. Her first book, Black Women against the Land Grab: The Fight for Racial Justice in Brazil, won the 2014 National Women’s Studies Association Gloria Anzaldúa Book Prize. She is currently at work on her second book, which is focused on the ways in which state violence limits activist research and writing.

Morton, Presidential Penn Compact Associate Professor of Philosophy, is a scholar of the philosophy of education, with a particular emphasis on educational injustice. Her recent book Moving up without Losing Your Way: The Ethical Costs of Upward Mobility, which won the Association of American Colleges and Universities’ Frederic W. Ness Book Award, focuses on the hidden ethical costs faced by first-generation and low-income students. Morton is highly engaged in public philosophy and has been interviewed for The Atlantic, Inside Higher Education, PBS, and IAI news; and has written pieces for Aeon, The Philosophers’ Magazine, The Chronicle of Higher Education and New York Daily News.