Two Elected to the American Academy of Arts and Sciences 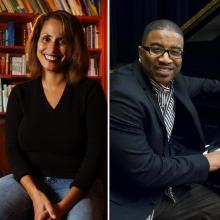 Guthrie Ramsey, Edmund J. and Louise W. Kahn Term Professor of Music, and Eve M. Troutt Powell, Christopher H. Browne Distinguished Professor of History and Africana Studies, have been elected members of the American Academy of Arts and Sciences. They are among 276 honorees for 2020, recognized for their excellence and accomplishments.

A musicologist, pianist, and composer, Ramsey is a widely published author of books on African American music and musicians. He is currently completing two new books, a collection of mid-career essays, Who Hears Here?, and a monograph history of African American music from the slavery era to the present.  As the leader of the band Dr. Guy's MusiQology, he has released three CDs and performed at a number of venues. He also produced a documentary film, Amazing:  The Tests and Triumph of Bud Powell, and co-curated an exhibition at the Smithsonian’s National Museum of American History and Culture about how the Apollo Theater shaped American entertainment. Ramsey is the founder and editor of the blog Musiqology.com, which discusses musical issues of the day.

Troutt Powell teaches the history of the modern Middle East and the history of slavery in the Nile Valley and the Ottoman Empire. She has received fellowships from the American Research Center in Egypt and the Social Science Research Council and has been a fellow at the Institute for Advanced Study in Princeton and at the Radcliffe Institute for Advanced Study. In 2003 she was named a MacArthur Foundation Fellow. Her most recent book is Tell This in My Memory: Stories of Enslavement in Egypt, Sudan and the Late Ottoman Empire. She is now working on a book about the visual culture of slavery in the Middle East which will explore the painting and photography about African and Circassian slavery in the late 19th and early 20th centuries.

Founded in 1780, the American Academy of Arts and Sciences honors exceptional scholars, leaders, artists, and innovators and engages them in sharing knowledge and addressing challenges facing the world.