Michael W. Meister, W. Norman Brown Professor, Department of the History of Art, University of Pennsylvania, and Consulting Curator, Asian Section, University of Pennsylvania Museum of Archaeology and Anthropology, has served as Chair, Departments of South Asia Studies and History of Art, and Director of Penn's South Asia Center

Along the Indus River and in the Salt Range mountains, temples dating from the sixth to the early eleventh century survive in upper Pakistan. A joint project with Professors Abdur Rehman, past Chairman of the Department of Archaeology, University of Peshawar, and Farid Khan, founder of the Pakistan Heritage Society, has begun to analyse and document these important monuments in the history of South Asian temple architecture. Two seasons of excavation have been carried out at the site of North Kafirkot.

A preliminary review and analysis of this tradition, "Temples Along the Indus," was published in Expedition, the Magazine of the University of Pennsylvania Museum of Archaeology and Anthropology, 38.3 (1996): 41-54. To download a pdf, click here.

The text as well as the preliminary typescript have been posted. Waisab and Seraiki have also provide links to this material.

The Salt Range Temple Project excavated an important new temple designated Temple E at north Kafirkot in 1997. To download a report on both seasons of excavation published in Expedition 42.1 (2000): 37-46, click here.

Views of Kafirkot following excavation are available, as well as hypothetical reconstructions of Temple E based on neighboring Temple A.

Support for the Salt Range Temple Project has been received from the Middle East Center and South Asia Regional Studies Department, University of Pennsylvania Research Foundation, and the American Institute of Pakistan Studies.

For a full list of project publications, see below.

Further archaeological work and exploration begun at the Salt-Range site of Amb, in association with the Department of Archaeology and Museums, Government of the Punjab, have been suspended. 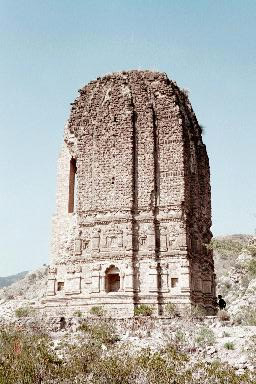 Amb, Temples A and B

For a full .pdf set of Plates download PORTFOLIO.