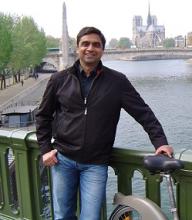 Ghate plays a continued, crucial role in the transformation of the Penn alumni landscape in India. He serves as the co-chair of the Western India Alumni Interview Committee and advises on the interview process and the recruiting of new interviewers. “We're proud of alumnus Eknath Ghate, who has gone from his undergraduate math major days here at Penn to a distinguished career in mathematical research,” says fellow mathematician Dennis DeTurck, dean of the School of Arts and Sciences. “His work focuses on the interaction between number theory and algebraic geometry represents two deep and beautiful branches of mathematics.”

The award consists of a citation, a cash prize, and a monthly honorarium until the age of 65. It is awarded by the prime minister at a ceremony organized by the Council of Scientific and Industrial Research in New Delhi.