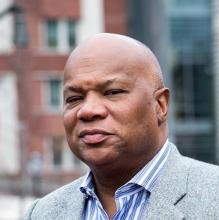 The annual award honors the best scholarly work in political science on ethnic and cultural pluralism.

Hanchard received the award for his book The Spectre of Race: How Discrimination Haunts Western Democracy. In the book, he argues that exclusionary policies have always been central to democratic practices since their beginnings in classical times, discusses how marginalization is reinforced in modern politics, and explains why these contradictions need to be fully examined if the dynamics of democracy are to be truly understood.

The Spectre of Race: How Discrimination Haunts Western Democracy was named one of Times Higher Education's Best Books of 2018.

Hanchard is the director of the Marginalized Populations Project in the Center for Africana Studies. He received a 2019 Making a Difference in Diverse Communities grant for his project, "Memory and Identity in Afro-Brazilian Archives.”