Art and Politics, From Graphic to Cinema: A Conversation With Marjane Satrapi

Art and Politics, From Graphic to Cinema: A Conversation With Marjane Satrapi 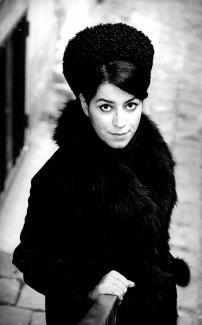 Moderated by: Fatemeh Shams, Assistant Professor of Near Eastern Languages and Civilizations

Artist, author, and filmmaker Marjane Satrapi is the creator of the graphic novel Persepolis, which tells the story of her youth in Iran in the 1970s and ‘80s. Internationally acclaimed, Persepolis has been translated into over 40 languages and was named one of the 100 Best Books of the Decade by The Times of London. Satrapi co-directed the animated film based on the book, which received the Jury Prize at the Cannes Film Festival and more than 15 other major international awards.

Satrapi’s books for adults and children include Chicken With Plums, for which she also co-directed the film adaptation. Her other movies include The Voices and the forthcoming Radioactive, based on a graphic novel about Marie and Pierre Curie and starring Rosamund Pike and Sam Riley. Her illustrations appear regularly in newspapers and magazines around the world.

The Levin Family Dean's Forum is a celebration of the arts and sciences. Initiated in 1984, the Forum presents leading intellectual figures who exemplify the richness of the liberal arts. The Levin Family Dean’s Forum is made possible by a generous gift from Stephen A. Levin, C’67, in honor of his sons Eric T. Levin, C'92, and Andrew Levin, C'14.