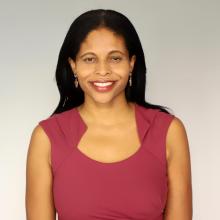 Margo Natalie Crawford, Professor of English and Director of the Center for Africana Studies, has been appointed Edmund J. and Louise W. Kahn Professor for Faculty Excellence. She is a scholar of African American literature and visual culture, with a particular focus on global Black studies and diasporic cultural movements. Crawford is the author of Black Post-Blackness: The Black Arts Movement and Twenty-First-Century Black Aesthetics, which won the 2019 James A. Porter Book Award; Dilution Anxiety and the Black Phallus; and the co-edited volumes New Thoughts on the Black Arts Movement and Global Black Consciousness. What Is African American Literature?, a reconsideration of the role of textual production, diasporic tensions, and affect in the shaping of the “idea” of African American literature, is forthcoming.

The Edmund J. and Louise W. Kahn Professorship for Faculty Excellence was established through a bequest by Edmund J. and Louise W. Kahn. Edmund Kahn was a 1925 Wharton graduate who had a highly successful career in the oil and natural gas industry. Louise Kahn, a graduate of Smith College, worked for Newsweek and owned an interior design firm. They supported many programs and projects at Penn, including Van Pelt Library, the Modern Languages College House, and other initiatives in scholarship and the humanities.