Ramanan Raghavendran Named Chair of SAS Board of Advisors 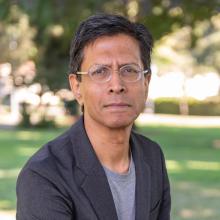 Ramanan Raghavendran, ENG’89, W’89, LPS’15, has been appointed the new chair of the School of Arts and Sciences Board of Advisors, as of July 1, 2022. Raghavendran takes over from Michael Price, W’79, who is stepping down from the Board after more than 20 years of service.

“Ramanan truly walks the walk when it comes to his commitment to the liberal arts, and even earned a Master of Liberal Arts degree from our division of Liberal and Professional Studies while a member of our Board,” says Steven J. Fluharty, Dean and Thomas S. Gates, Jr. Professor of Psychology, Pharmacology, and Neuroscience. “He has always been extremely thoughtful and imaginative in his engagement with the School, and I am looking forward to his continued counsel and engagement as our Board’s new chair.”

Raghavendran is the co-founder of Amasia, a venture capital firm that invests in companies that help fight the climate crisis and enhance sustainability through behavior change. He also serves on the board of SF Goodwill, the Goodwill affiliate in the Bay Area. He has been the seed funder and board member of several NGOs over the years, including Magic Bus, which works with 500,000 at-risk children in South Asia.

“I am excited and humbled to take over this position,” says Raghavendran. “The double helix of practicality and pure knowledge is in Penn’s DNA. Both ornamental and useful, the liberal arts are critical to the growth of the young men and women that Penn educates, and contributions there seem to have a multiplier effect that goes far beyond a simple economic analysis. I look forward to continuing our strong trajectory.”

Price served on the School’s Board of Advisors since 2002 and has been on its Executive Committee since 2007. He took on the role of Vice Chair in 2016 and was named Chair in 2020. He also served as the chair of the Power of Penn Arts & Sciences Campaign, which ran from 2018-2021 and raised over $565 million toward the strategic priorities of the School.

“Michael’s dedication to the School of Arts and Sciences is simply extraordinary, and we are enormously grateful for his steadfast service and support over two decades,” said Dean Fluharty. “Michael is very passionate in his belief in the Arts and Sciences mission, and I have tremendously valued how he has worked with us over many years to push the envelope in important new ways.”

“It's been an honor and a pleasure working with the people of the School of Arts and Sciences to advance its priorities,” says Price. “The School has so much to offer, from lessons on how to live to glimpses at the deepest universe, and I’m gratified to see that it is well positioned to continue to advance research, while preparing students to live and work in the real world.”

Price is a University Trustee. He and his wife, Vicki, established the Price Center for the Digital Humanities, and have also contributed to the Stephen A. Levin Building, the Singh Center for Nanotechnology, the Rebecca W. Bushnell endowed professorship, the Jean-Marie Kneeley endowed professorship, and the Arts and Sciences Annual Fund. Additionally, they are members of the Men and Women of Pennsylvania.